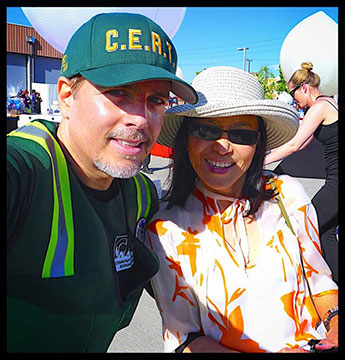 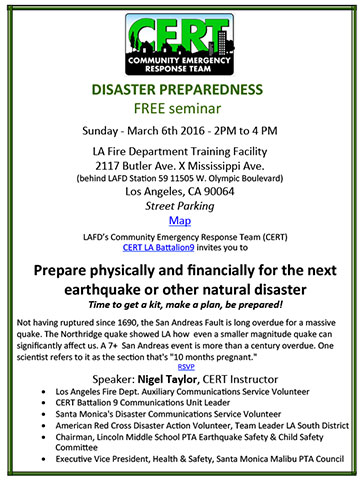 Unfortunately, whether it be foreign or homegrown terrorists or an angry mentally-unstable person, Active Shooter incidents are on the rise. Like natural disasters, the best way to survive one is to be prepared for one. Below is the advice CERT Battalion 4 Coordinator Bill Pope received at a recent briefing by Captain Stacy Gerlich of the Los Angeles Fire Department’s Homeland Security Unit.

If there is an escape path, Run.

Evacuate yourself whether others will go with you or not.

Leave your belongings behind.

Prevent other from enter the area.

If the shooter has not yet seen you, Hide.

Fine a lockable room and/or barricade the door.

Turn off lights and noisy equipment.

Silence you cell phone. (We should all push the City to implement the “Text-to-911” capability.)

If others around you become hysterical, find another place to hide, or put them between you and the shooter and play dead when the hysterical people attract attention and are shot. (Practice motionless breathing. Use your muscles to expand your chest and breath slowly by raising and lower your diaphragm inside your expanded chest.)

If you can’t escape or hide quietly, Fight.

If there is time,

Organize those around you to commit to attack. You may be injured but you will die if you do nothing.

If no time to organize,

Throw things (shoe, purse, book) to make shooter duck giving you a second or two to charge them.

Yell “Attack” to switch shooter’s mind from offense to defense, and to encourage others to join the attack.

Go for the gun. It may be better to wrestle with the shooter over the gun while keeping it pointed in a safe direction while others incapacitate the shooter. Keeping the shooter’s hands on the gun may prevent them from triggering any explosive device them may be wearing or carrying.

When Law Enforcement arrives, their first priority is to stop the shooter. Do nothing they might misconstrue as an act of aggression such as pointing or yelling at the Officers. Drop anything you are carrying and put your hands up. Obey commands.

Give First Aid to the wounded. Stop bleeding by direct pressure on the wound, first with your hand then with a makeshift pressure bandage if possible and elevation. If necessary, make a tourniquet for extremity wounds with a wide belt, tie or scarf placed 2 inches above the wound. Tighten until the blooding stops.

The following video produced by the FBI and Homeland Security dramatizes an Active Shooter incident.

To watch the video, click this link https://www.fbi.gov/about-us/cirg/active-shooter-and-mass-casualty-incidents/run-hide-fight-video. Warning, the first part may be disturbing.